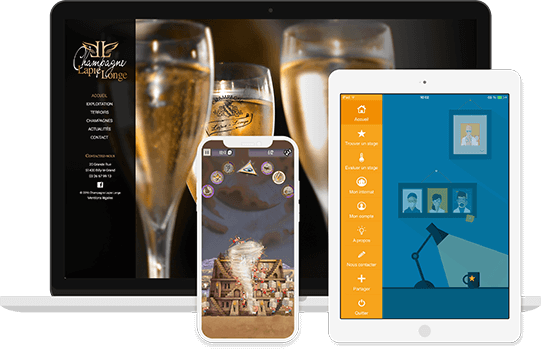 Want to realize your project ?

Get a quote now!

In recent years, smartphones have become essential. With hundreds of millions of users worldwide, smartphones provide application and mobile website owners considerable visibility, so why not create your own?!

The benefits are numerous: expand the visibility of your products or services, increase brand of your company, have a mobile service, being able to view your products in a 3D display or being accessible from anywhere.

The games are also very popular, who has never wanted to be the next Angry Birds?? If you have a game idea, so do not hesitate!

The responsive design benefits you in many different ways as a good website that appears to look and function well on any platform.

Providing the same design across various devices gives the same customer experience whatever device they are viewing your site on. Customer satisfaction and user experience is highly important and providing continuity helps to seamlessly provide a fluid design and the same content.

Having a responsive website can not only benefit your customers but can reduce the work load for you to create the website, and at the end reduce developments costs and time.

With the annual releases of the iPhone, Apple has created a growing and stable community of followers with its popularity. This is due in part to Apple’s tendency to always provide something fresh with its yearly hardware updates along with multiple software iterations that enhance the experience but at the same time, support the older generation handsets.

But that’s not the only reason the iPhone is well regarded by so many. It also provides unforgettable experiences to the end user. Developing on the iOS platform is getting more and more popular.

Most people own many different devices, such as smartphones, tablets, laptops and desktops. The gaming experience has always been limited to one particular device, which limits the gaming possibilities of your gamers and cuts you off other gamer communities. But with some powerful technologies, you can target multiple devices and communities. Here comes ShiVa 3D.

ShiVa is a game engine and game editor allowing you to integrate all the elements necessary for the realization of a video game: scenes creation, HUD edition, pathfinding system, particles, shaders, animations managment, sounds... ShiVa also has an integrated script editor to perform all the programming of the game.
Once developed, the game can be exported to a various number of platforms, such as web (HTML5), iPhone, iPad, Android, Windows, Mac, Linux, Xbox, Playstation and many others. The baseline of ShiVa 3D could have been "Develop it once, export it everywhere".

All the games in my Portfolio were made using ShiVa 3D.

Development duration vary depending on the complexity of the technologies required by the application or website: geolocation, camera, music, video, 3D display ... the possibilities are endless.

A simple one may take a few weeks of development, while others are more complex and can take up to several months.

How much does it cost?

The rate of an application or website is obviously very closely linked to the development duration, but also the number of people required to work on the project.

The price can vary from a thousaud to several thousand dollars.

Describe as precisely as possible your needs in terms of functionalities and graphics. If you have one, do not hesitate to send me your design document.

You will get a quote as soon as possible.