1 sample is available for this product!

v2.0
- Now compatible with ShiVa 2.0.
- Plugin API compiled for Mac and Linux in addition to Windows : it will provide API completion in the Script module in ShiVa Editor for each of these operating systems.
- Now uses a user token instead of an email to activate

v1.1
- JPThread.create now takes the parameters of the function.

JPThread is another magic pack, allowing you to think your game conception in a new manner. It allows you to execute the code of a function over several frames.

As a result, the loading process will be executed over several frames, at a speed of 1 texture loading per frame. Your game execution will be much more fluid. JPThread.addYieldPoint ( ) mean the function execution pauses here and will start from here at the next frame. Of course, you can add this call several times in your function code.

Here is a screenshot of the Performance Reporter in ShiVa, you can see clearly that the function does not create a freeze at all as it is executed over several frames: 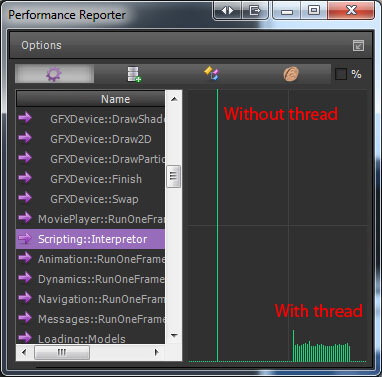 This feature is also very useful in many other cases, think for instance how you currently load a file into the cache. Now, you will be able to do the whole process with a single function call:

This pack is really powerful.